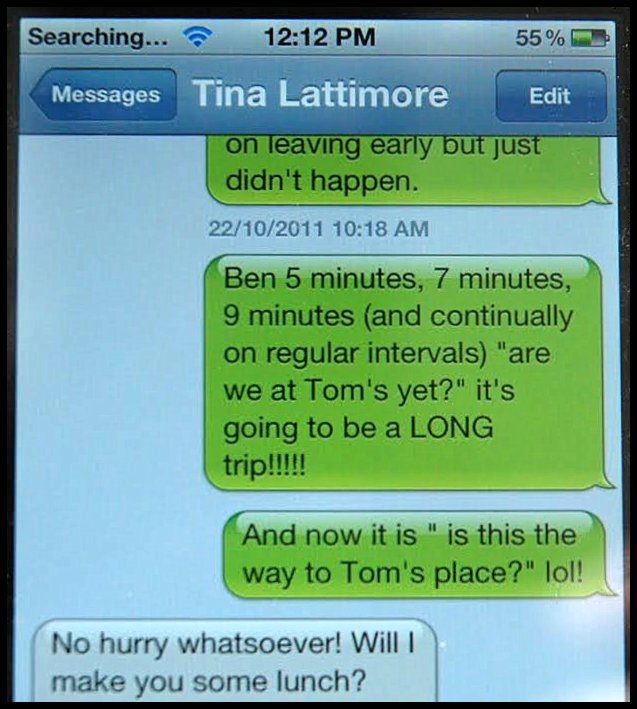 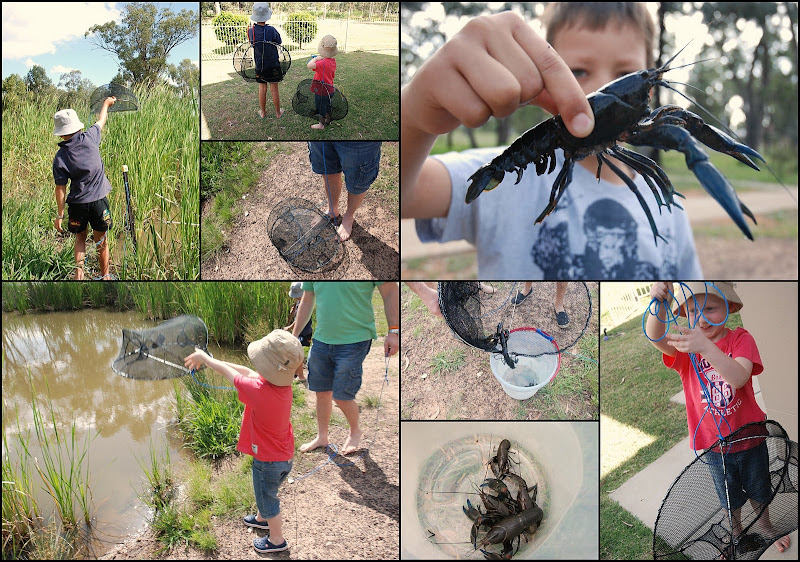 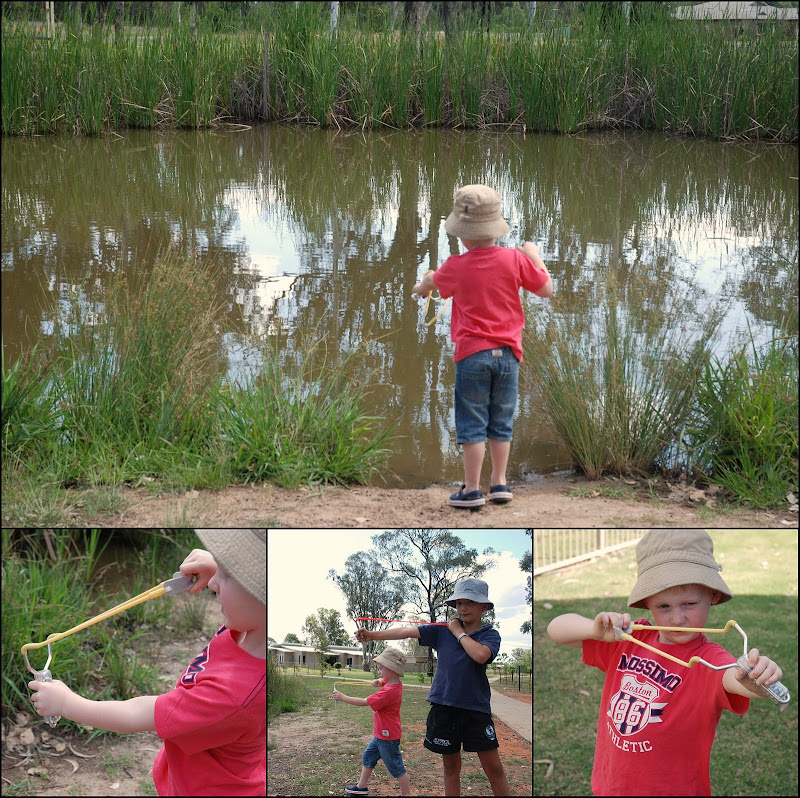 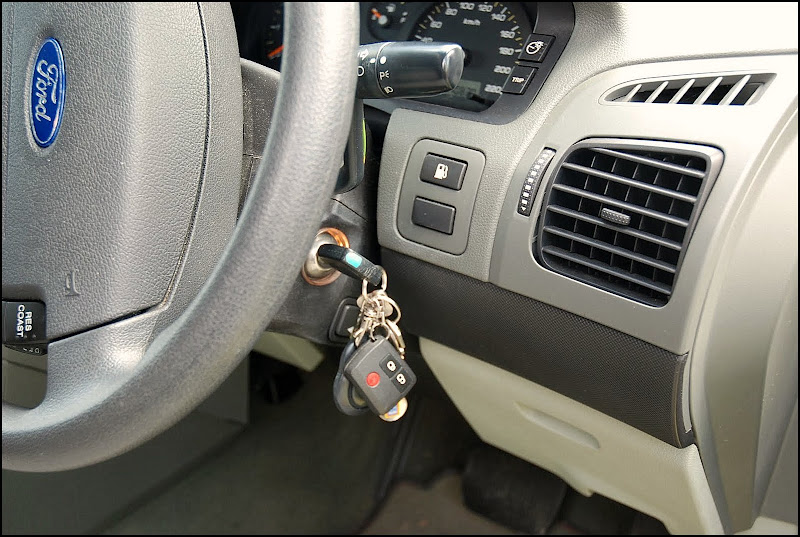 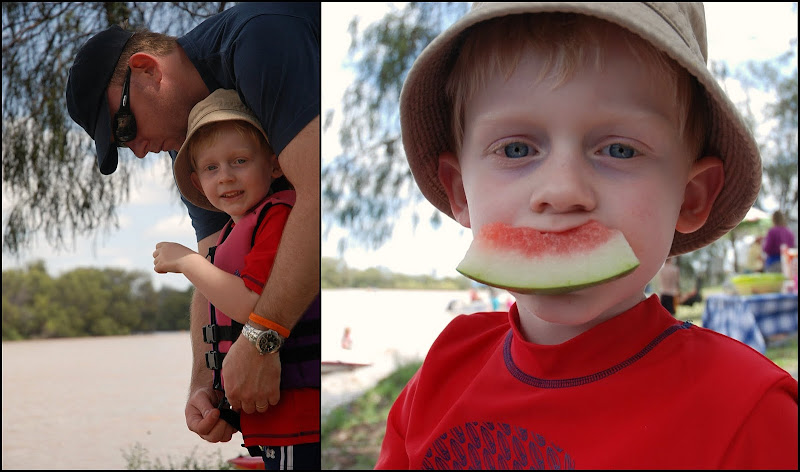 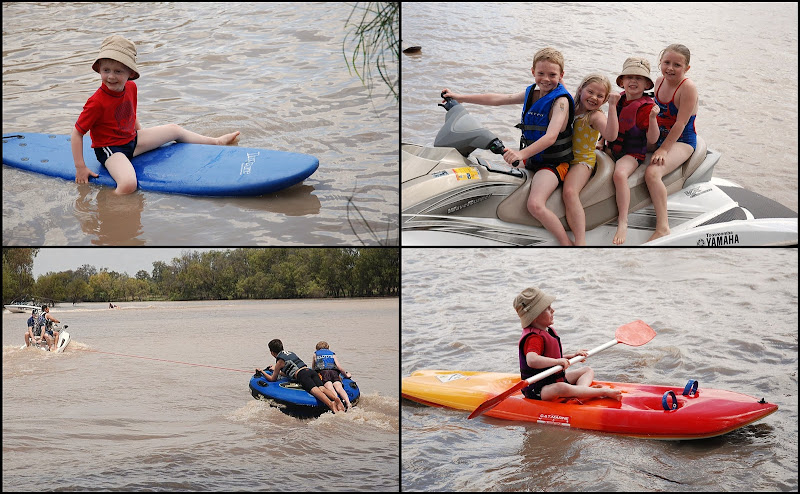 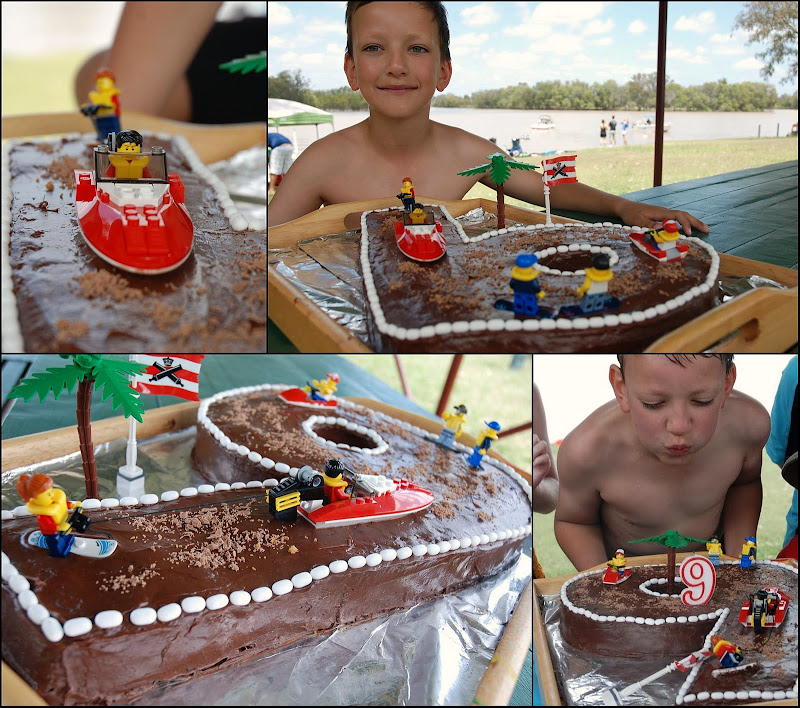 It was Andrew’s birthday yesterday.  Happy Birthday!!! Ben made him something special for his desk at work.  It’s an oldie but a goodie.  He made (with a little help from me) a paddle pop stick pen holder.  I can remember making one when I was a kid!! I am sure we all made something like this…. didn’t we?   Ben drew a family portrait on it.  I just love that he is bigger than all of us and that I am  so skinny…… his a genius!! 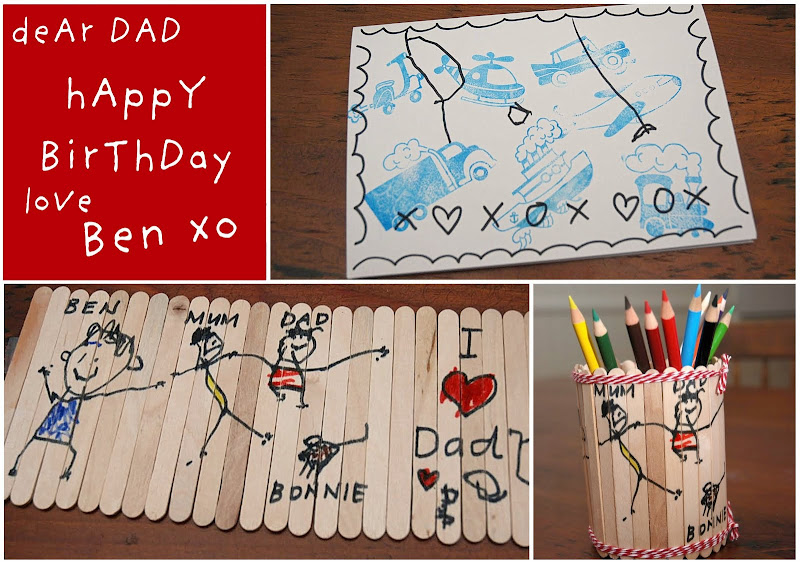 It is birthday central at our house.   It’s all about family get togethers,  birthday surprises,  cards, cake making and lots of cake eating – myself, my Mum, my Dad, Andrew’s Mum, Andrew’s Dad and Andrew all have birthdays within four weeks.  Andrew’s Mum and Dad have been touring Europe this year so they celebrated without us!! But my point in all this is that there are many opportunities for Ben to use his lovely new stationary supplies to make cards etc for family.

I think Ben out did himself once again drawing a portrait of Gamma on her birthday card (I know I have my Mummy Goggles on!). If you know my Mum it even looks a little like her!!  He wasn’t very keen to make another card I have to say.  But he did because he would pretty much do anything for his Gamma.  She would and does play Lego with him all day long!! 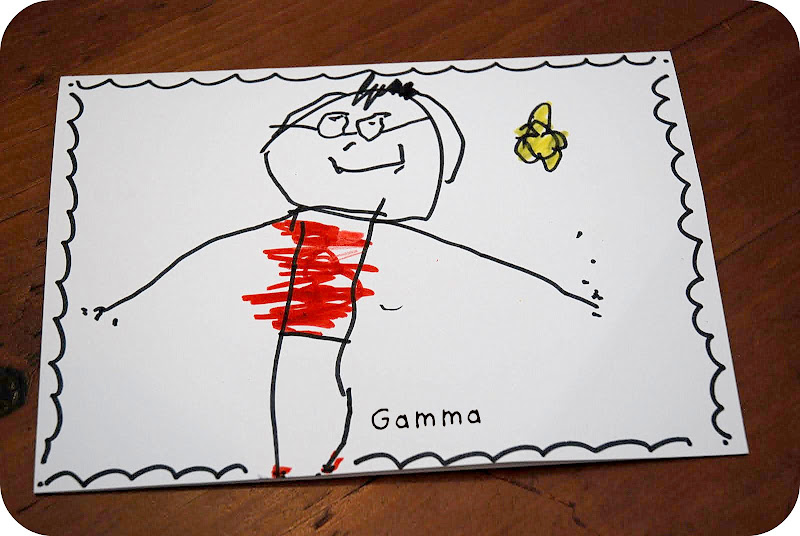 Next up Andrew’s birthday.  What will we do for Daddy?

It was with much excitement Ben (and his Mum and Dad) journeyed to the Gold Coast for Hugo’s second birthday.  Children’s birthdays remind me of all the excitement of childhood.  Hugo’s day was filled with presents,  bubbles, running, superheroes, swings, kisses, cuddles, cake, cheezels, friends and family. Ben had an amazing time playing with Hugo and Oliver, especially helping with the presents (sometimes a little tooo forcefully!).  Hugo is such an amazing little man with so many people who love and care for him.  It was our pleasure to be part of his special day xoxo. 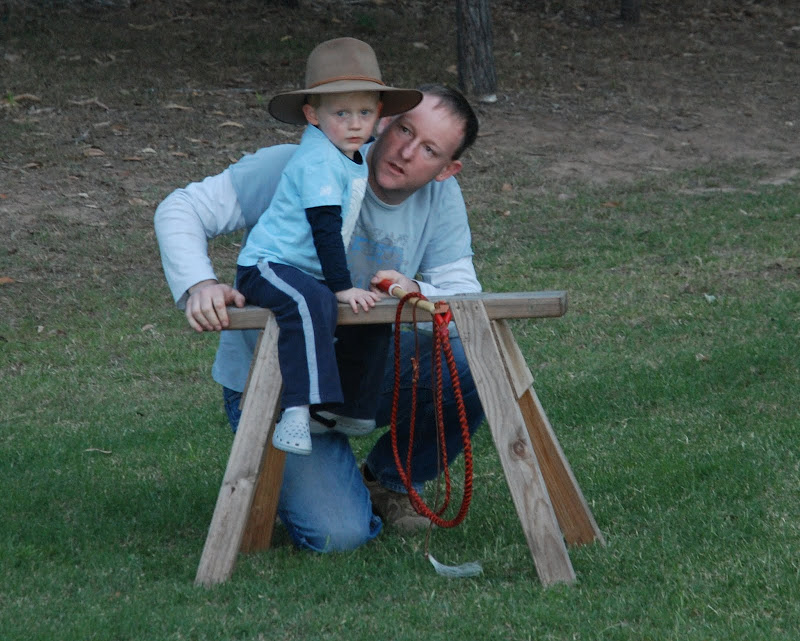 Our move to the outskirts of Ipswich has brought back memories for Andrew of his country roots.  Just before his birthday he mentioned to me that he had always wanted a stock whip.   I purchased one for him for his birthday.   When at the Ipswich Town and Country Centre, the sales attendant asked me what we intended to use the stock whip  for.  ‘Oh…. oh…… well we won’t be riding with it’ was my response while in my head picturing Andrew riding swinging his whip shouting ‘Ride like the wind Bulls Eye’.  I am sure I must have had a huge smirk on my face.  The sales attendant took a number of whips off the hooks, swung them strangely up the shop aisle before saying, ‘Yep this is the one, this will be great  to crack around the horses and cattle but not to ride with’.  So I nodded agreeing but thinking ‘yep sure thing, that’s exactly what we need for all the horses and cattle on our one acre’.  I didn’t dare inform the sales attendant  that we wanted it just to crack in the yard for fun and hang on the wall and look pretty!!

Andrew got a chance to break in the whip today…. I had to laugh.  I walked out the back and there is Andrew sitting on the saw horse cracking the whip – hilarious!! He mentioned tonight that he has a sore shoulder – even more hilarious!!!  Love you honey xoxo 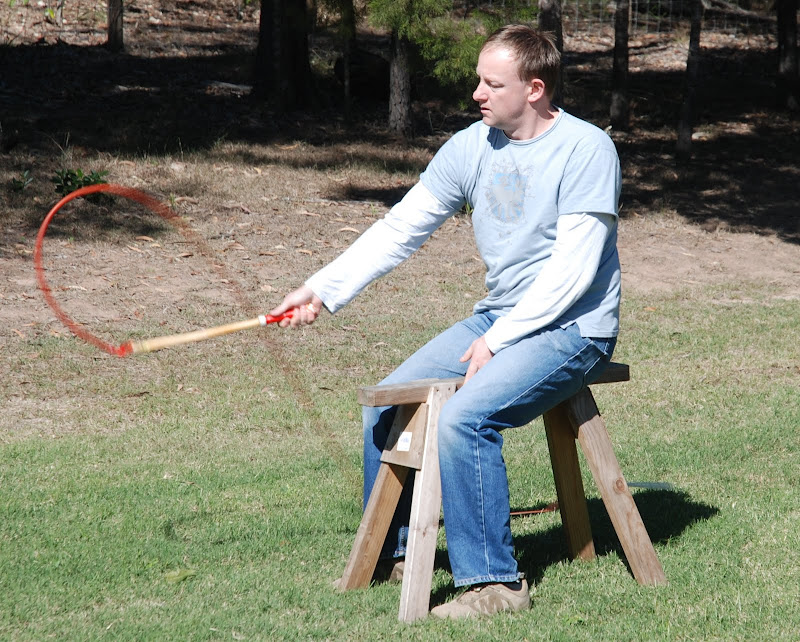 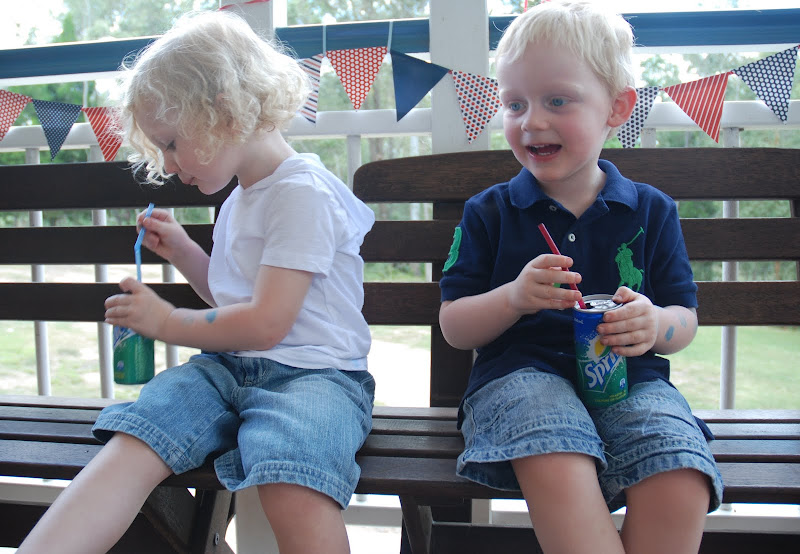 Family and friends are like quilts, pieced with memories, bound with love. . .

Ben turned three on the 16 April.  It was a time to celebrate with family and friends.  Ben is blessed to have so many people around him that love and care for him.  His third birthday was a celebration that began on Friday and lasted until Sunday night.  It was wonderful to have a house full of family and friends and messages from those who could not attend making special memories for our special little man xoxo.

The morning of Ben’s third birthday didn’t begin as early as we had imagined.  Ben slept in and we had to wake him!!!  He was overjoyed to see a bunch of wrapped presents in the lounge room.  He unwrapped them starting with the smallest ones!  He was delighted with his gifts – Rocky the crane (from Thomas), Hot wheels Cars, Hot wheels Racetrack, Thomas the Tank Engine wooden track and engines, a book, and the favorite and most cherished was a Push Mower with a pull cord.  When we bought the mower it was packaged in its  box…… OMG it is the loudest mower ever!!! 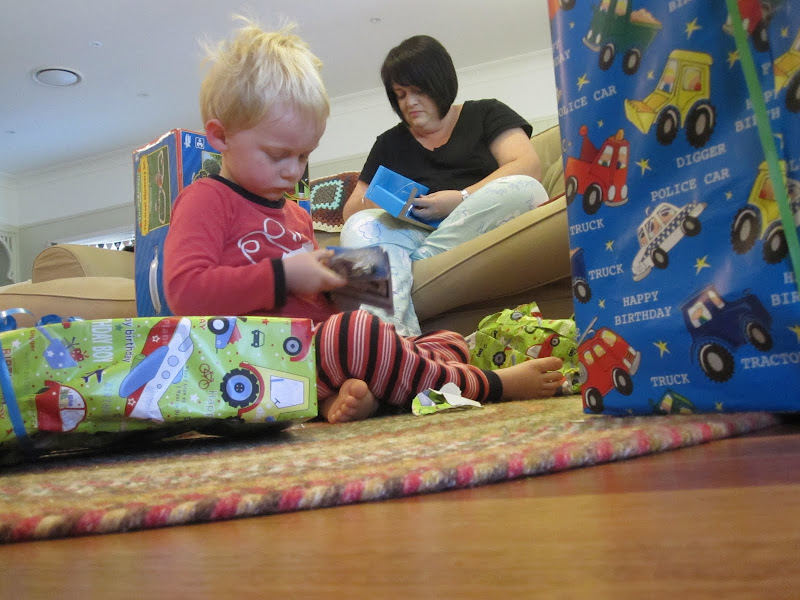 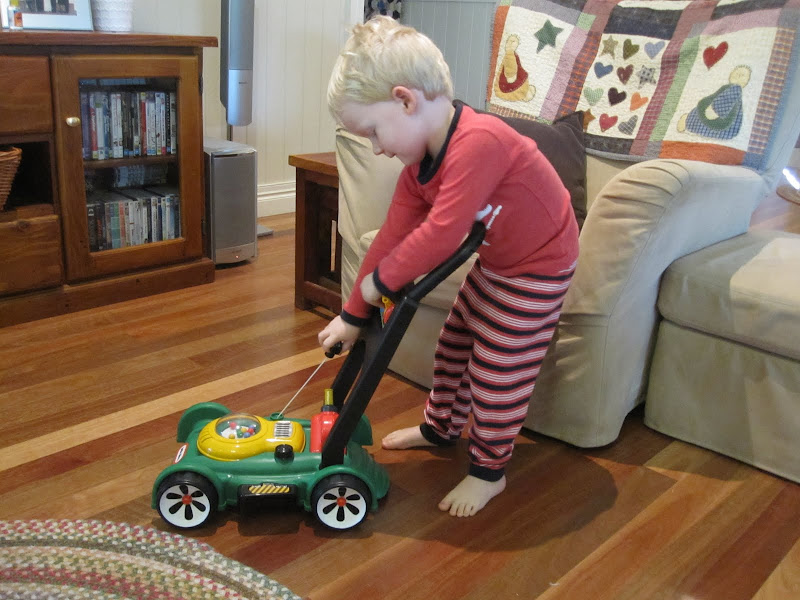 Ben spent the day at the Railway Workshops with Mum, Grandma, Bree, Joseph and Tom.  It is his favorite place to visit.  The Vegemite sandwiches and chips were a hit at lunch!  Friday evening saw family and friends begin to  arrive  in preparation for the party on Saturday.  It was fantastic to have so many extra hands to get everything organised and to assist in the last minute challenges.  Thanks to all who helped with the balloons and reviving the lamingtons!! 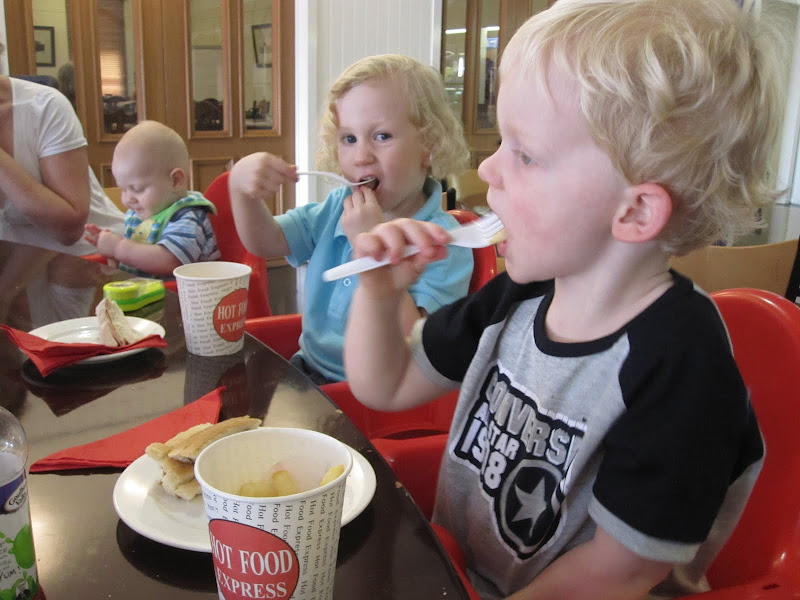 Ben was so excited Saturday morning.  His excitement when his friends arrived was so lovely.  The children made box cars, played with bikes, scooters, pushcars, gyrocar, kite, trains, matchbox cars, dolls and balloons.  They ate lollies, donuts, lamingtons, cake and sausages.  They had a fantastic time with the birthday cake.  Finlay added some extra decorations which nearly gave me a heart attack.  After we had sung happy birthday and blew out the candles I stepped inside to get a knife and in went all the little fingers.  The kids loved it!!  Andrew and I enjoyed watching the children and loved catching up with family and friends old and new.  Ben was very lucky to receive some great gifts.  His grandparents were especially generous with Nanny and Grandad George giving him a train table, track and  trains and Grandma and Grandad giving him a tool bench with all the tools and some great 3D Melissa and Doug car puzzles.  Thank you to everyone who made this time so special.  We love, love, love Birthdays in our house!! xoxo 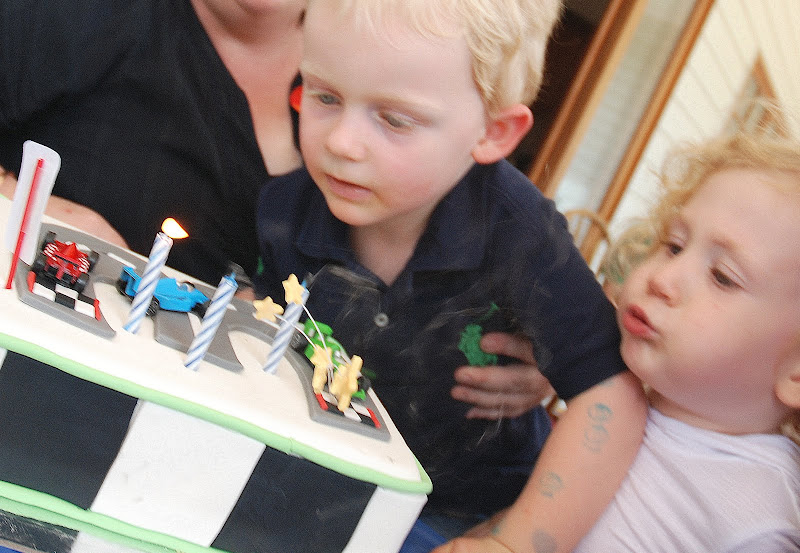 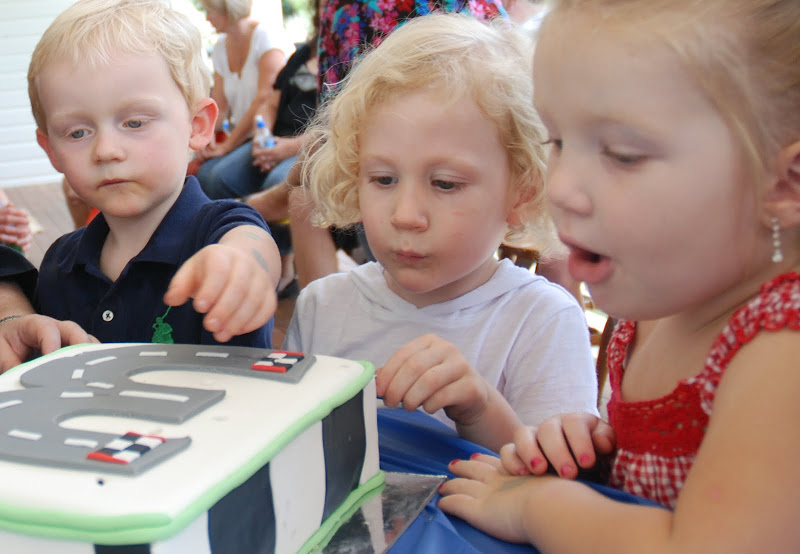 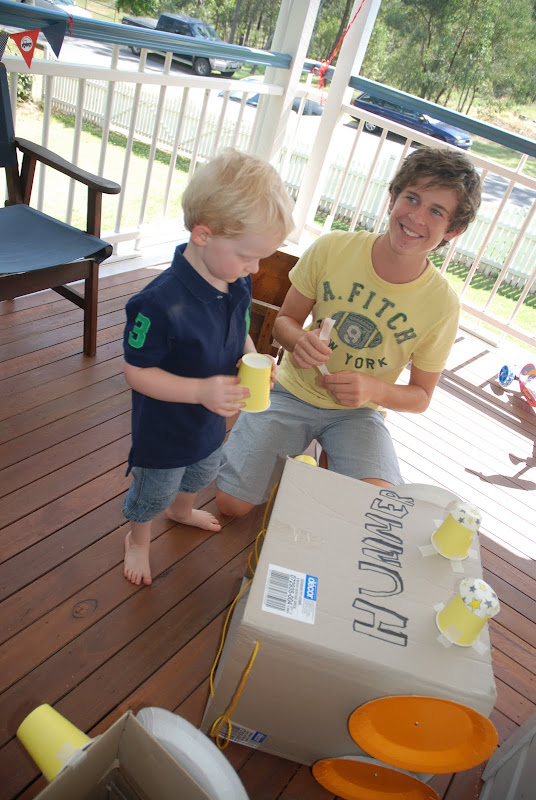 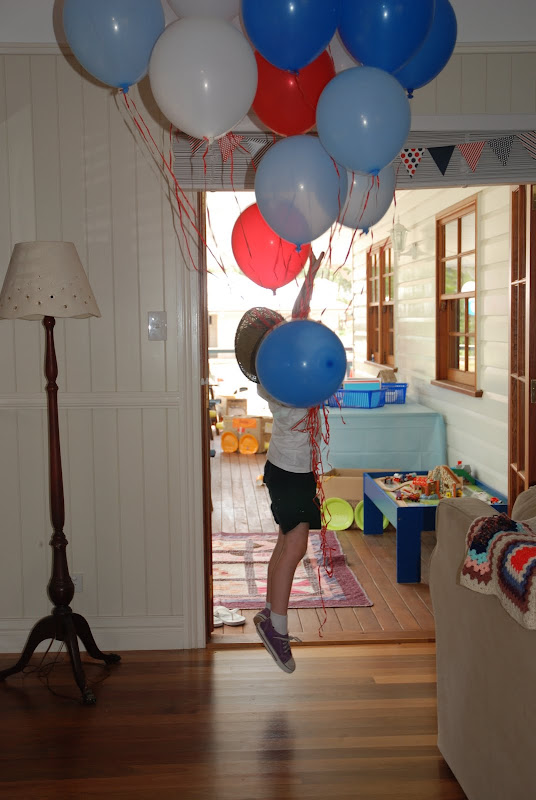 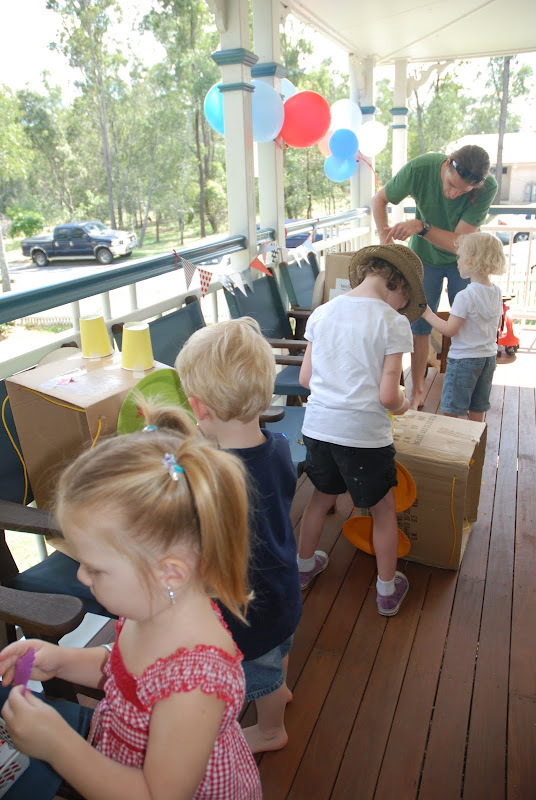 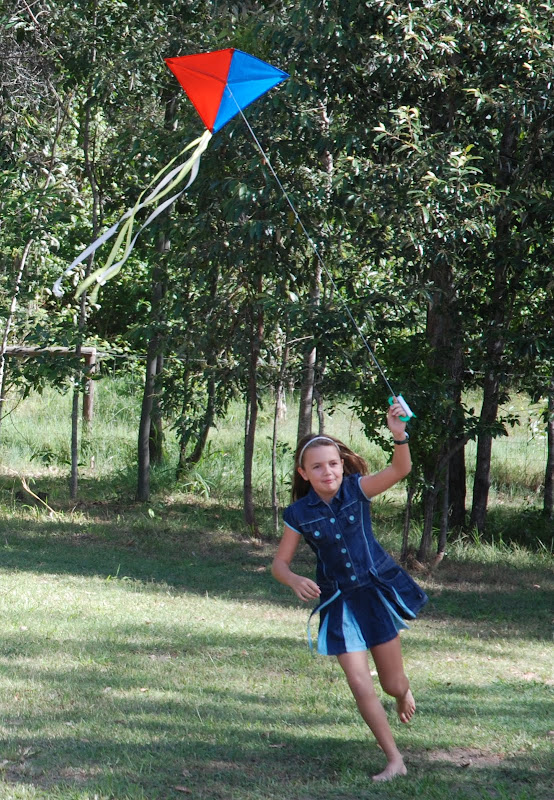 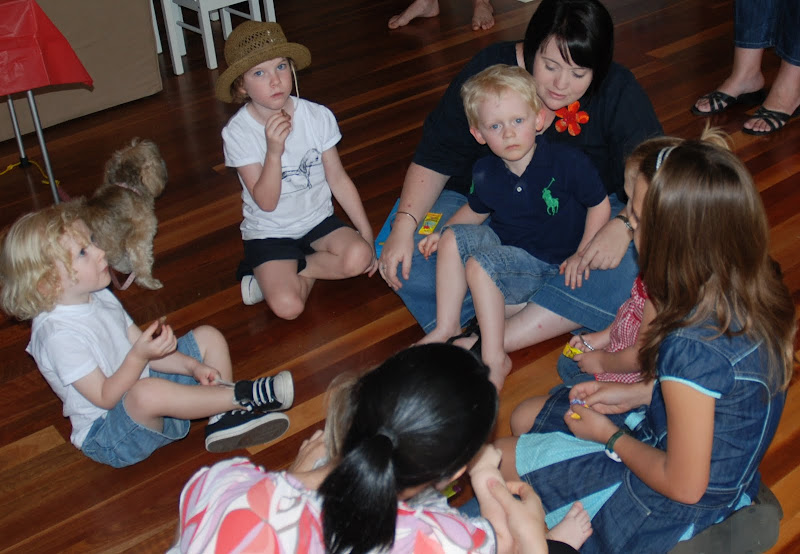 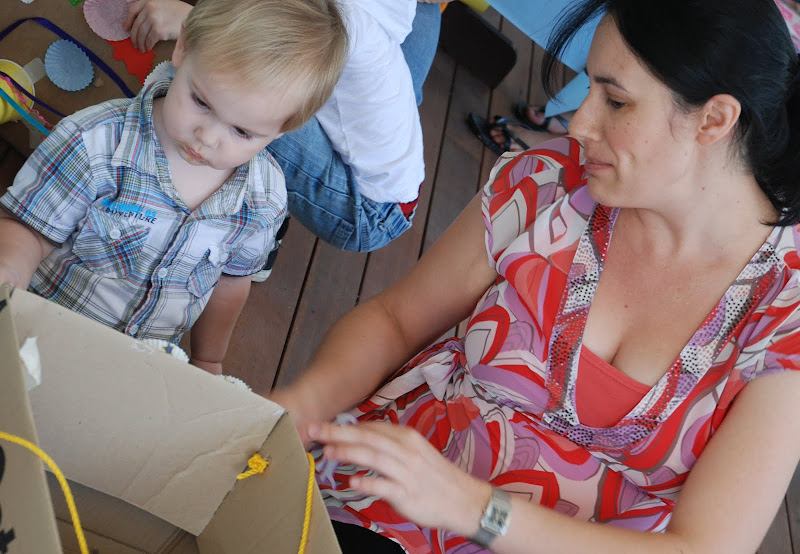