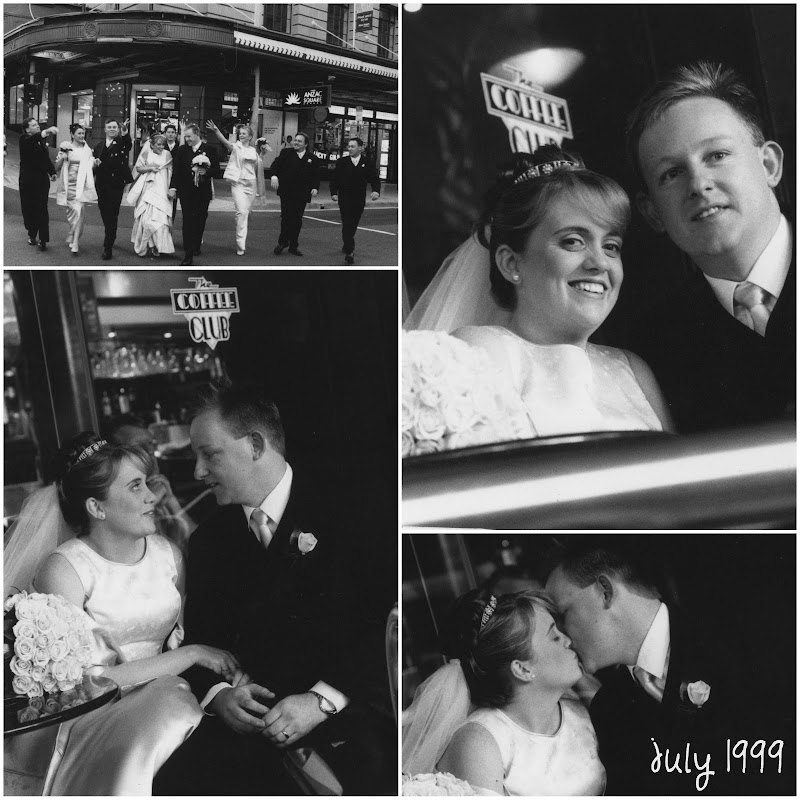 This week Andrew and I celebrate our 12 year wedding anniversary….

We met when we lived in a small country town in southeast Queensland.  Andrew and I went to the same high school. Andrew was a couple of years older and at school he was a bit of a practical joker.  I have to say, if anyone had have told me I would have married Andrew, I would have thought they were crazy.  He rolled his eyes back in his head for his year twelve photo…..OH DEAR!!

Andrew’s family built a house on the block of land next to ours when Andrew was away at University – we became neighbours.    Our families became good friends – even building a path between the two houses.  When Andrew came home for holidays, I used to think he was ‘kinda nice’ and we became great friends.  We dated for a while when I was in senior high school but  we went our separate ways after a short time, although we remained close friends.  He always had my heart really.  A couple of years later (I recall it like it was yesterday), Andrew began to have eyes for another girl.  My heart sank as I realised how foolish I had been those years earlier.  So, in February of 1994, we began dating again and have been together ever since.

In 1996 Andrew proposed…. down on one knee with his grandmother’s ring.  Of course I said ‘yes’!  In July 1999 we married in a fairy-tale wedding.  What I remember the most, was the happiness of our special day.  I remember saying my vows and both Andrew and I shedding a little happy tear.

I am so blessed to have Andrew as my husband.   Don’t get me wrong, it hasn’t all been peaches and cream.  I am a little fiery at times and Andrew is so laid back.  So I am sure that there have been many times he would’ve liked to throw a bucket of water on me and I would’ve liked to light a fire under him!!  But, I am thankful that every night one of us always kisses the other goodnight.

These days, I still think he is pretty wonderful.  It is now not only the two of us.  We have our beautiful boy, Ben.  Watching Andrew be a Dad just makes my heart melt.  I am sure I have fallen in love with him all over again.

So Honey, I am so glad I married the boy next door…… Happy Anniversary…….. I love you xo

Linking up with The Anderson Crew and Paisley Jade

Andrew has long insisted that he does not snore….. but every night he falls asleep on the couch and makes noises that sound a lot like snoring. Bonnie doesn’t seem to mind. Sorry honey…love you xo. I think I might get into trouble for this one!!