Ben and I headed off to the Art Gallery to the Wonderland exhibition this morning. This mornings activity was cup cake decorating. As the photos show the tables were filled with lollies, icing and cupcakes. When we arrived we were asked to sit on a mat and wait for the other parents and children to arrive. I immediately thought ‘oh no…. Ben sit still while the lollies and cakes are in full view’. But I looked around and saw ALL of the other children doing it so gave it a go. Well….. it lasted maybe one minute. He was just amazed by everything. Finally when we got started he wasn’t that interested in actually decorating but he was keen on eating. But again as I looked around the room Ben was the only child nibbling on the lollies. The other children are decorating the cakes!! When everyone was finished we were then invited to go and sit on the mat to eat the cakes. Well by this stage Ben had been sitting, nibbling and kind of decorating his cake for about twenty minutes. There was no way he was going to sit and eat his cake. He wanted to move. So we headed into the exhibition to look at all the amazing hidden treasures. I did feel like the other parents were looking at us with the disapproving look. But is it normal for a two year old to sit at a table full of lollies and not eat them? I am quickly learning there is no normal two year old!! Ben is now enjoying his cupcakes at home after a good run outside! We did have a great morning. 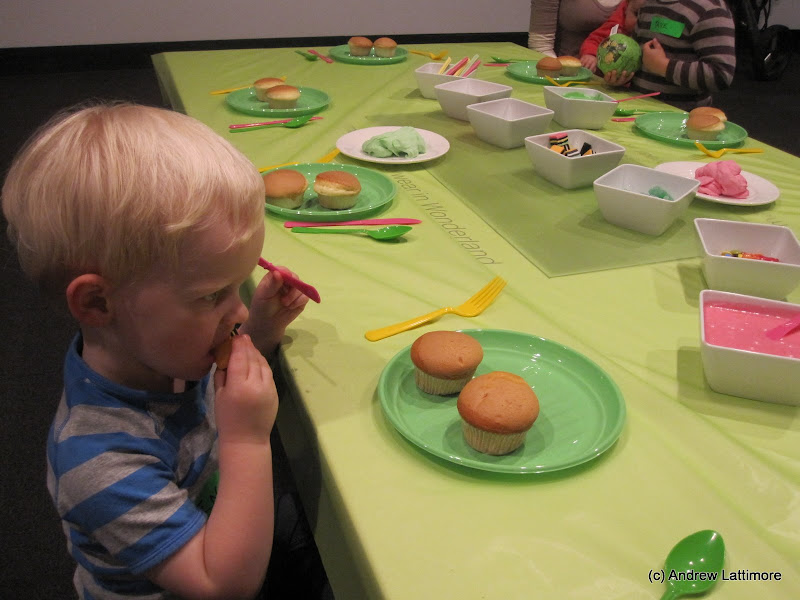