Ben’s loves to have his cousin (honorary) come and play. On this particular day the boys got grubby so a bath was needed before dinner. Oliver is toilet training and went to the toilet before his bath. The boys were having a great time in the bath and Oliver said ‘Toilet Mummy’ followed a short time later by ‘wee-wee….toooo late’. Emily and I both immediately looked at Ben and said ‘Don’t drink the bath water’. Kids you gotta love them! 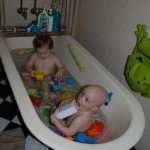