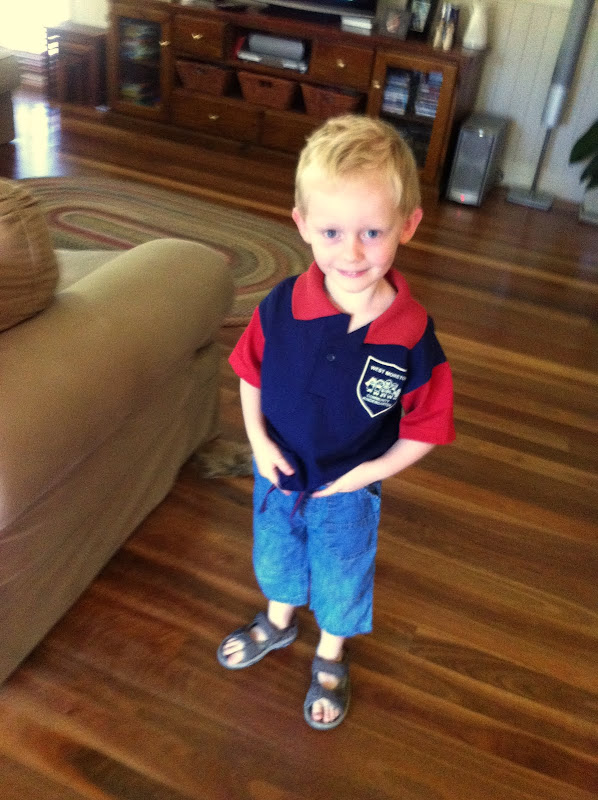 I was a little nervous about Ben’s first day at Pre-Prep.  Yes, there was tears…. from Ben and Mum.  And Ben even screamed out when I was leaving ‘Don’t go Mum!!’.  I saved my tears for the drive home when I was away from Ben.  But before I even got  home the Pre-Prep Teacher called me to say Ben was settled playing blocks on the carpet with a new little friend.  What a relief!  As an Early Childhood Teacher tears  in the first weeks of school is something that I have delt with many many times.  But always as a teacher and not as a parent.  So when the shoe is on the other foot…. it really pulls at those heart strings.

When I picked Ben up and asked him about his day,  he didn’t really give away many details. But he was smiling and happy.  His wonderful teacher makes a poster every day with photos and a summary of what the children have done.  I just love this!!  Over the last few weeks Ben hasn’t really had much to say when you question him about Pre-Prep.  He does however  spontaneously talk about a story he read or even sing a song he had learnt which is a good sign. His first few weeks have seen him bring home paintings, gluing, and decorated boxes.  He gave some of these to his Gamma which she has proudly displayed on her fridge.

So would I go as far as say that Ben loves to go to Pre-Prep…. well maybe.  He doesn’t give away much.  He isn’t one to take a leap, he stands back and watches before he makes a judgment.  But if his spontaneous conversations about Pre-prep are anything to go by….I think it is growing on him!

One thought on “What Did Monday Bring?”